Don't miss one of America's top 100 most-loved novels, selected by PBS's The Great American Read. Narnia . . . a land frozen in eternal winter . . . a country waiting to be set freeWitness the creation...

Don't miss one of America's top 100 most-loved novels, selected by PBS's The Great American Read. Narnia . . . a land frozen in eternal winter . . . a country waiting to be set freeWitness the creation... 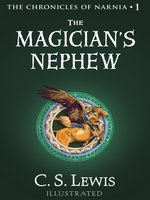 The Magician's Nephew
The Chronicles of Narnia, Book 1
C. S. Lewis
Privacy Policy
Thank you for your recommendation

The Magician's Nephew
The Chronicles of Narnia, Book 1
C. S. Lewis
A portion of your purchase goes to support your digital library.